The Best Magic Trick In The World Is Also The Simplest 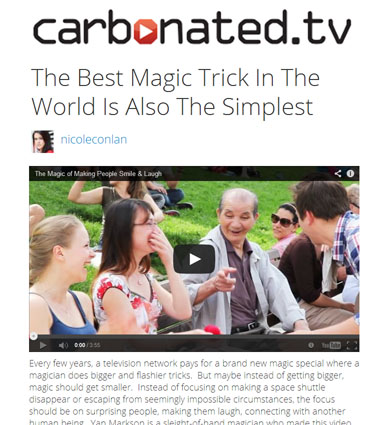 Nicole Conlan (@nicoleconlan) wrote that the best magic trick in the world is also the simplest. Here’s what she had to say:

“Magicians are famous for doing bigger and crazier tricks, but this magician thinks the real magic is in connecting with another person.

Every few years, a television network pays for a brand new magic special where a magician does bigger and flashier tricks. But maybe instead of getting bigger, magic should get smaller. Instead of focusing on making a space shuttle disappear or escaping from seemingly impossible circumstances, the focus should be on surprising people, making them laugh, connecting with another human being.

Yan Markson is a sleight-of-hand magician who made this video to show that real magic is something that happens between people.”

See The Video: “The Magic of Making People Smile & Laugh!”